Employees from Hatzel & Buehler and Bluestone Communications generously donated funds to support the American Red Cross and their disaster relief efforts.  The companies matched all employee donations, with a 100% matched donation.

Hatzel & Buehler was selected as ENR MidAtlantic’s Specialty Contractor of the Year.

The oldest electrical contractor operating in the United States had a 6% revenue increase in the MidAtlantic from 2015 to 2016 and a 15% revenue increase between 2014-2015. The firm credits its recent successes to its geographic growth into new markets, an increase in customer spending and an enhanced focus on business development.

The Wilmington, Del.-based firm has six offices in the MidAtlantic region. In those offices, they have 600 union employees and 100 nonunion employees. The firm’s West Virginia office recently received special recognition from the National Electrical Contractors Association for excellence in safety.

Recent and ongoing work in the region includes infrastructure upgrades at the Nemours Alfred I. DuPont Hospital for Children in Wilmington, an expansion at Chester County Hospital in West Chester, Pa. and the Children’s Hospital of Philadelphia’s Central Utility Plant.

The firm’s largest corporate charity is a foundation that raises money for pediatric cancer, the Alex’s Lemonade Stand Foundation. In partnership with the American Red Cross, Hatzel & Buehler is also matching every dollar its employees donate to families impacted by Hurricane Harvey and Hurricane Irma.

The firm will be honored at the Nov. 2 Best Project’s event in Baltimore and featured in the December issue of ENR MidAtlantic. The December issue will also feature the entire list of the top-ranked specialty contractors based on 2016 revenue. The 30 participating firms in this year’s survey are from Delaware, Maryland, Pennsylvania, Virginia, West Virginia and the District of Columbia. They have collected a total of $3 billion in revenue, up from the the $2.4 billion that the 18 firms in last year’s survey reported.

Hatzel & Buehler ranked No. 4 in last year’s survey with $119 million in regional revenue. To find out where the firm ranks in this year’s survey check out the December issue of ENR MidAtlantic.

The Hatzel & Buehler Ohio (Cleveland & Chillicothe), Delaware and Philadelphia offices all received special recognition from NECA for their excellence in safety. Each office proudly received the “2017 Zero Injury” Award.

“NECA’s Safety Excellence and Zero Injury Awards program is an elite safety recognition program focused on recognizing thriving companies that excel in multiple areas of their safety and health programs. Awards are given to member companies that consistently have OSHA recordable injury and fatality rates at levels lower than the industry standard, and implement internal company safety practices above and beyond basic compliance. The Zero-Injury Award recognizes those member-companies that have worked a full calendar year without recordable incidents. The Safety Excellence Award is the associations premier recognition program, and acknowledges member-contractors safety performance.” (www.necanet.org) 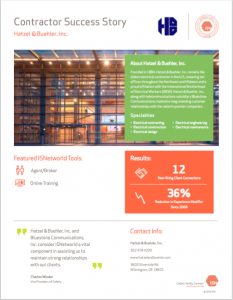